Home > A Quilt for THE DAY IT SNOWED TORTILLAS
Blog

A Quilt for THE DAY IT SNOWED TORTILLAS 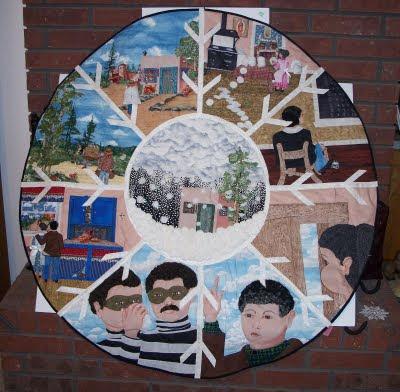 Congratulations to Lou Lovelady Sikes! She made this beautiful quilt that narrates with quilted pictures Joe Hayes’ signature story The Day It Snowed Tortillas. Lou entered her quilt in a quilting contest in Portales, New Mexico, and she walked away with 1st prize in the Challenge Fabric Category. ¡Felicidades a Lou! Being an exceptionally good quilter, she wants all who read this piece to know that her quilt is for sale. 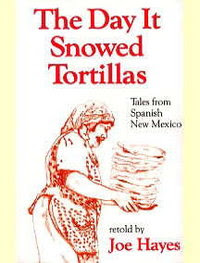 Hearing about Lou’s success with her quilt reminded us about the remarkable history of Joe’s story and the book which is its namesake–The Day It Snowed Tortillas, Joe’s first book [see note below]. From the beginning of Joe’s career this story about how the clever woman fooled her husband by making him think that during one cold night it snowed tortillas–of course she fooled a band of outlaws in the bargain!–was a signature story. When Joe and his friend Joe Mowry of Mariposa Publishing (was it 1984 or 85?) decided to publish a collection of Joe’s stories, “The Day It Snowed Tortillas” was the natural title. The book became one of the treasured classics of the American Southwest. Mariposa reprinted it tens of times. I’m sure Mariposa Publishing sold well over a 100,000 of them–many of them to Joe Hayes. Back then, Joe was traveling the backroads of New Mexico to school districts hither and yon where teachers and principals could scrape up $50 to pay him to tell stories to the children. Kids who are now adults with kids and even grandkids still tell Joe about when they first heard his stories. It was important to them, living in rural communities, to hear stories that spoke to their own traditions. In 2003, Cinco Puntos Press bought the rights for The Day It Snowed Tortillas from Mariposa and published a new bilingual edition. Let me tell you: The Day It Snowed Tortillas is what the publishing industry calls an EVERGREEN. It just keeps on selling! 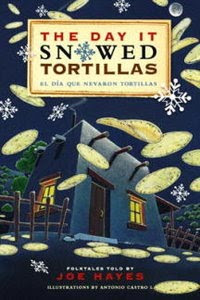 [NOTE: Mariposa Publishing, if I remember correctly, published The Day Is Snowed Tortillas a few months before Cinco Puntos published La Llorona, The Weeping Woman, a bilingual telling of La Llorona that became a nationally recognized cornerstone of bilingual books for children.]