I was born to people who didn’t want me and so they gave me away. But I guess the people they gave me to didn’t want me either. No one wanted me. That’s why I ended up on the streets alone and uneducated. I couldn’t read or write. I didn’t know anything and the whole world knew it. 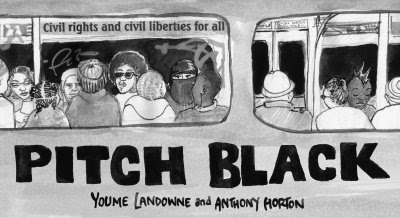 This is the voice of Anthony Horton. Born in 1968, Anthony is a homeless artist who lived underneath New York City. If you want to see his work, you’ll have to walk along the tunnel walls in the darkest parts of the transit system. In 2005, he met Youme Landowne, another artist, there at one of the subway stops and they began to talk. They rode downtown and uptown and downtown again, discussing art and life, and they decided to begin working together. They decided to write a book which would tell Tony’s story. But here was the issue—how do you tell the story of a life that seems so bleak? Or, as Tony might say it, how do you turn your life into art? How do you bring light out of pitch black darkness?

Pitch Black: Don’t Be Skerd is the fruit of the collaboration by Youme Landowne and Anthony Horton. And it’s the first Cinco Puntos Press graphic novel. Or really, graphic memoir. Besides the trade journals, the primary media attention is primarily local⁠—New York City kind of local. First there was an interview in the Brooklyn Daily by Sam Howe, and then the New York Times ran a nice piece in its “City Room” of its New York/Region section authored by Sewell Chan. The comment string on the NYT piece was interesting, and I entered my own comment to the string:

I am the co-publisher of Cinco Puntos Press. We were honored to have published Pitch Black, the graphic memoir by Youme Landowne and Anthony Horton. Thanks to Sewell Chan and the NYT for the nice article and also to the folks in the comment section who took the time to consider Youme’s and Anthony’s work. I found all the comments very interesting, especially since my own reading is different. From my first reading, even though the book is based on a true life story, I saw Pitch Black as a parable, like, for instance, the Good Samaritan. It’s a simple story. A man and a woman meet at a subway station beneath Manhattan, and, against all the expectations and ingrained fears of our culture, they become friends, with all the ups and downs that any friendship has. First they share their ideas about art. The woman shows the man her artwork. The man invites his friend to see his own art and life he has made for himself in the tunnels. Pitch Black opens the door to a life that many people would not otherwise look at. 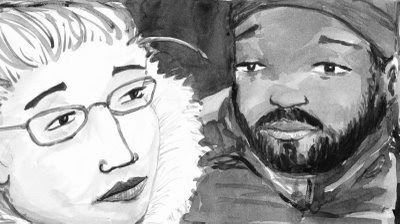 Like all parables, the cast of characters and the context could easily be changed. The story could be about a Jew and a Palestinian in Jerusalem, a poor woman and a rich man on the streets of Bangladesh, a Republican and Democrat for God’s sake. Our times, I think, demand such stories. The point is in reaching out across cultural, racial and economic borders to touch and understand another person. And because Ms. Landowne and Mr. Horton tell their story with grace and minimalism, they allow for such a reading as mine. By the way, this is Youme’s second book. The first, Selavi: A Haitian Story of Hope, received numerous awards, including the Jane Addams Peace Award for 2005. She’s a brilliant artist and storyteller. Part of her art is in listening to the stories of other people, especially people who aren’t like her. –Bobby Byrd

Youme Landowne and Cinco Puntos Press will be attending the Miami Book Fair the 15th and 16th of November. We’ll be writing more about Pitch Black after the festival. And we hope to do a short video of Youme talking about the collaboration with Anthony and the making of the book. Stay tuned.