A Perfect Season for Dreaming

An old man tells his granddaughter about the nine most beautiful dreams of his lifetime.
Categories: All Books | Bilingual | Children | Fiction | Latinx/Chicanx
Tags: family | picture books

An old man tells his granddaughter about the nine most beautiful dreams of his lifetime.

"As a boy, I always hoped that when we broke the piñata at a party, that all sorts of beautiful things would come flying out. Nothing every came out but candy. I suppose I wrote this book to set the world right."

An old man tells his granddaughter about the nine most beautiful dreams of his lifetime. So, what exactly is the perfect season for dreaming? For Octavia Rivera, it's summer, when the sky is so blue and a few lovely clouds come floating along to decorate it. It turns out that Octavio Rivera is a beautiful dreamer. And on these first long days of summer, he is visited by some very interesting dreams. But Octavio doesn't tell anyone about his dreams, not after the first one, not after the second, not after the next or the next or the next.

Finally, though, he can't stand it anymore and he wants to tell someone so bad that his heart hurts. He decides that the only one he can trust with his dreams, the only one who won't make fun of him for being too old or eating too much chorizo, the only one who will understand, is his young granddaughter Regina because she also has beautiful and fantastic dreams. And that sets Octavio Rivera free to enjoy one last long and lovely dream. 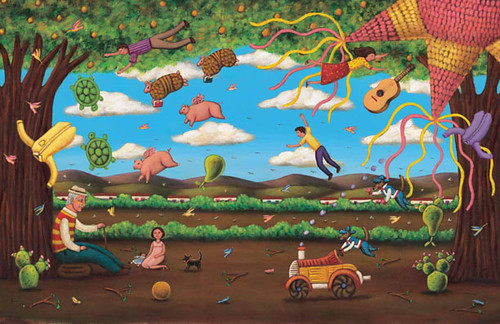 Benjamin Alire Sáenz, novelist, poet, essayist, and writer of children's books, is at the forefront of the emerging Latino literatures. He has received both the Wallace Stegner Fellowship and the Lannan Fellowship, and is a recipient of the American Book Award. Sammy & Juliana in Hollywood, his young adult novel, received the Americas Award in 2005, and was named one of the Top Ten Best Books for Young Adults in 2005. Born Mexican American Catholic in the rural community of Picacho, New Mexico, he taught Creative Writing at the University of Texas at El Paso for many years, and considers himself a fronterizo, a person of the border.

Born in Mexico, Esau Andrade Valencia comes from a family of folk artists. Although still young, he is increasingly recognized as a master artist in the tradition of the great painters such as Diego Rivera and Rufino Tamayo, in whose footsteps he follows. Esau's paintings are included in the collection of The Museum of Latin American Art in Long Beach as well as in the Downey Museum of Art in California.

Best Book for Children, Texas Institute of Letters (TIL)

6 reviews for A Perfect Season for Dreaming