A Spoon for Every Bite


In this lovely New Mexico folktale, a rich man tries to prove his wealth to his poor neighbors by using a new spoon for every bite.

The rich man laughed aloud. "You had only two spoons! And you bought a third one for me to eat with! Why, I have so many spoons I could use a different one each day of the year if I wished to." That's how the rich man mocked the poor man in this classic.

From master storyteller Joe Hayes and illustrator Rebecca Leer, in this lovely New Mexico folktale, a rich man tries to prove his wealth to his poor neighbors by using a new spoon for every bite. In the process, he's served a pretty dish of comeuppance. Joe Hayes is one of America's premier storytellers a nationally recognized teller of tales from the Hispanic, Native American and Anglo cultures. His bilingual Spanish-English tellings have earned him a distinctive place among AmericaÍs storytellers. 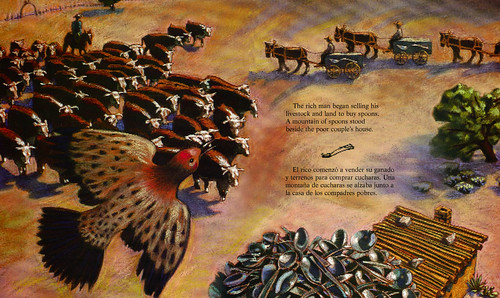 A Note from Joe Hayes for Readers and Storytellers:

In telling this story, I have combined two elements of the Hispanic story tradition of the Southwest. The deceptive reference to the use of a tortilla as an eating utensil is cast in the form of a picaresque tale featuring two compadres, one poor but clever and the other rich and overbearing.

Several brief tales and chistes hinge on the tortilla as a spoon that is used only once. From a high school teacher I heard a Mexican version in which a proud conquistador brags to a humble Indian that his king eats off plates of silver and gold. Feigning indifference, the Indian replies that his chief is so rich he uses a different spoon for every bite. In an Anglo-American variant a seasoned traveler on the Santa Fe Trail yarns a greenhorn about the high style of life in New Mexico with the same idea. The joke is well-known to the old ones in New Mexico. On one occasion as I told my version at El Rancho de las Golondrinas Historical Museum south of Santa Fe, I noticed an elderly Hispanic gentleman in the group turn toward his wife when I said the phrase "a spoon for every bite" and silently mouth the word tortilla.

Humorous tales about rich and poor compadres abound in Hispanic story lore. In his compendious collection of Spanish narrative in the Southwest, Cuentos españoles de Colorado y Nuevo Mêjico, Juan B. Rael dedicates an entire section to los dos compadres, and many stories that are otherwise categorized involve two individuals identified as compadres, el uno rico, el otro muy pobre. In one such tale, the tortilla/spoon joke is briefly repeated.

Curiously, while the old tales so often portray an almost adversarial relationship between compadres, the actual relationship is quite the opposite. The role of godparent is highly esteemed, and parents typically choose a very dear friend to fill it. The tales of los dos compadres, however, are quite old and perhaps reflect the time when the wealthy hacendado would serve as godfather to all the children born to his peones as an expression of noblesse oblige. Whatever the true reason may be, these tales serve as a reminder that folktales cannot always be viewed as accurate expressions of the contemporary mores and practices of the culture from which they derive.

Watch Joe Hayes tell his tale in English or Spanish in these free, online videos, part of the Joe Hayes Storytelling Collection.

6 reviews for A Spoon for Every Bite