Johnny is four years old and he LOVES to dish out kisses.

Johnny is four years old and he LOVES to dish out kisses.

A bilingual counting book for pre-schoolers. Juanito wakes up so happy he delivers wonderful kisses to everybody—to his bossy sister, his mother on the couch, his father the pitcher, Stray Grey the Cat, but he saves 10 for his grandmother! That's when he got the nickname Lover Boy and the idea for this counting book was born.

Then artist Francisco Delgado jumped into the fun. He imagined hearts and kisses flying in the perfect space created by Johnny's happiness, but the inspiration for Francisco's exuberant paintings was Francisco's own son Pedro. So Lover Boy was inspired by two boys and is dedicated to all young children in the world: may they always overflow with kisses! 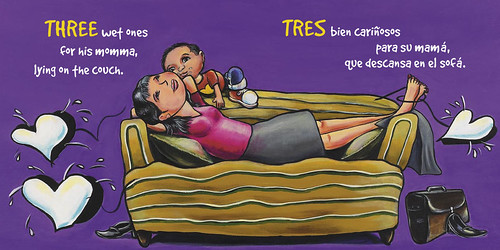 The Everything I Have Lost
by Sylvia Zéleny

A Peculiar Kind of Immigrant’s Son
by Sergio Troncoso