Teacher's Guide to The Bee Tree

A stunning children's picture book based on the real-life traditions of honey hunters.—Midwest Book Review

The Bee Tree is a picture book that tells the magical story of a honey hunt in the dense rainforest of Malaysia. The story is narrated by Nizam, a young boy whose grandfather Pak Teh is the leader of the honey hunting clan, the one who has the honor of climbing up the 120-foot tualang tree in the annual honey hunt. But Pak Teh is getting older and is now ready to prepare someone to take his place. He believes that Nizam is the one.

On the first moonless night in October, Nizam and Pak Teh and the other honey hunters enter the dark rainforest. Pak Teh prepares for the hunt with a prayer and a traditional story. Then he begins to climb and Nizam follows. At the top, they use the honey hunters' secret to keep from being stung, while their clansmen below soothe the bees with chanting. After a week of gathering honey in the nights, the clan returns home to celebrate their harvest. At this feast, Pak Teh announces that Nizam will be his successor.

The Bee Tree is the culmination of a long journey for pollination biologist Stephen Buchmann, who met Pak Teh in the mid-nineties through his work. Stephen was so inspired by Pak Teh that he dreamed of The Bee Tree as a way of spreading Pak Teh's legacy to the Western world.

In February 2007, Stephen Buchmann and artist Paul Mirocha traveled back to Malaysia to present the finished book to Pak Teh and to the sultan of Pak Teh's province in the rain forest preserve surrounding Pedu Lake, just below the Thai border in Peninsular Malaysia. Their trip coincided with the new moon and the honey hunt. 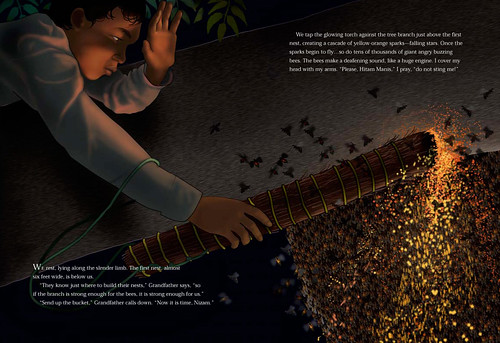 The Bee Tree is a perfect resource for any classroom! We have a teacher's guide with a multitude of fun activities and ideas for lessons involving The Bee Tree. The comprehensive back matter gives a solid introduction to Malaysia & it's people's culture, rainforests and pollinators which makes the book easy to involve into classroom lesson.

The Bee Tree is a collaboration between three remarkable people: a scientist who has been fascinated with insects since the third grade; a writer who believes that writing children's books is her way of building a better world; and an artist who never stops sketching and drawing as he travels.

Stephen Buchmann has traveled all over the world studying bees. He is a member of the entomology department faculty at the University of Arizona, and the author/co-author of 150 scientific papers and 8 books (including The Forgotten Pollinators and Letters from the Hive). He is active in international pollination research, conservation and policies to protect the world's pollinators and the plants they pollinate. He served on a National Academy of Science committee investigating the status of pollinators in North America.

Diana Cohn is an award winning children's book author. Her books include ¡Sí, Se Puede! / Yes, We Can! (Cinco Puntos Press); Dream Carver(Chronicle Books); and Mr. Goethe's Garden (Bell Pond Books). She is a hobbyist beekeeper with a deep interest in pollination ecology. She first met Steve Buchmann while working on a radio documentary on the pollination crisis in America. As aresult of their meeting they co-founded The Bee Works, an organization dedicated to public education about pollination ecology.

Paul Mirocha's illustrations first appeared in Gathering the Desert by Gary Paul Nabhan (University of Arizona Press), winner of the John Burroughs Medal for natural history in 1985. After 13 years as a graphic designer for the University of Arizona's Office of Arid Lands Studies, Paul left to become a full-time illustrator, producing over 20 children's picture books and pop-ups as well as modern nature writing, among them High Tide in Tucson, Prodigal Summer, and Small Wonder, by Barbara Kingsolver. Paul has made five trips to Malaysia. His paintings in The Bee Tree come directly from his sketchbook and memories from those experiences.

8 reviews for The Bee Tree