The Civil War is over. Gabe wants to find his mama, but his mama got sold away.
Categories: All Books | Children | Fiction
Tags: picture book

Young Gabe's is a story of heartache and jubilation. He's a child slave freed after the Civil War and he sets off to reunite himself with his mother who was sold before the war's end. "Come morning, the folks take to the road again, singing songs, telling stories and dream-talking of the lives they're gonna live in freedom. And I follow, keeping my eyes open for my mama. Days pass into weeks and one gray evening as Mr. Dark laid down his coat, I see a woman with a yellow scarf 'round her neck as bright as a star. I run up to grab her hand, saying, Mama?" Gabe's odyssey in search for his mother has an epic American quality, and Keith Shepherd's illustrations—influenced deeply by the narrative work of Thomas Hart Benton—fervently portray the struggle in Gabe's heroic quest.

"Black folks still have so many stories to tell in our journey. When I first read Alexandria's manuscript I'm not ashamed to say I got choked up. I'm amazed there's never been anything done before that told such a heart wrenching segment of Reconstruction in America." To read more about how Walking Home to Rosie Lee came about, read the McBookwords interview with A. LaFaye and Keith D. Shepherd here 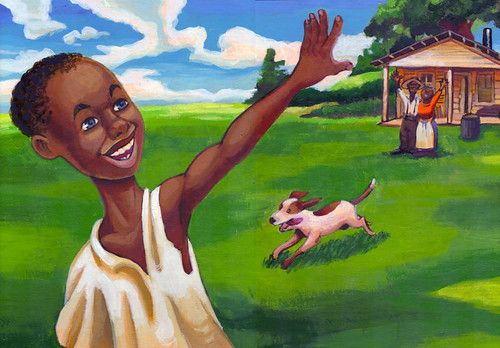 A. LaFaye hopes Walking Home to Rosie Lee will honor all those African American families who struggled to reunite at the end of the Civil War and will pay her respects to those who banded together through the long struggle for freedom. She is the author of the Scott O'Dell Award winning novel Worth and lives in Tennessee with her daughter Adia.

Keith D. Shepherd is a painter, graphic designer and educator working out of Kansas City, Missouri. His painting "Sunday Best" is part of the Negro League Baseball Museum's permanent collection. He describes his work as being "motivated by family, religion, history and music."